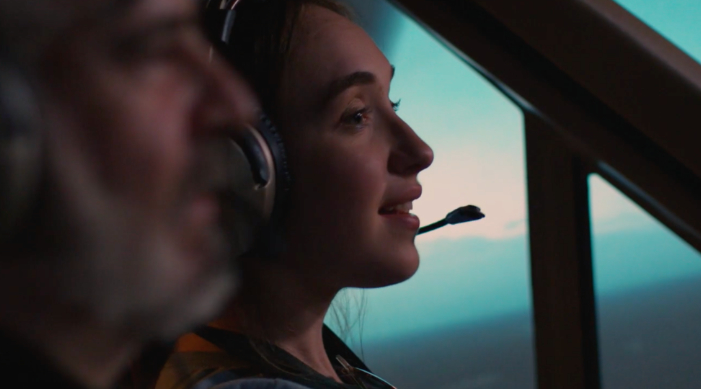 Synopsis: In the presence of physical danger, a teenage girl must remain calm under pressure in order to survive the flight of her life.

HH: As a career aviator, I spent many years hitting the “glass ceiling” on a trailblazing journey to excel as a pilot and aircraft mechanic. Influenced by books about Amelia Earhart, my journey began at the early age of 14, when my father and I took flying lessons before I could legally drive a car. It never occurred to me at such a young age that there would be a different standard or expectation based on my gender. I learned the hard way. I experienced many trials as a teenager and young woman in my career as a female aviator. Inspired by movies like Top Gun and Always, I decided it was time to start sharing my adventures in the sky as a filmmaker.

HH: In 2013 I began sculpting with parachutes to create art installations. There was something beautiful and magnificent about seeing the weightless fabric move in the air, but something was always holding it back or keeping it tied down. These art installations became a metaphor that represented my experience as a female aviator. At some point, I wanted my sculptures and art installations to tell the full story, not just part of it. Going back to 1989 -1991, I soloed on my 16th birthday at a small town airport where my friends got to watch and my brother recorded my solo on VHS. In 2014, I showed a professor a copy of my first solo video. He saw how vulnerable I was in the video and insinuated that there was something not right about my flight instructor. It was as if he knew what happened just by watching the mannerisms of the people in the video. From that moment forward, I knew my early flying days shaped my outlook on the world and not necessarily in a good way. After I wrote the screenplay with the help of another scriptwriter, Darren Usher, I finally came forward to my family who never knew my flight instructor had ill intentions towards a young teenage pilot.

HH: The most challenging aspect of building Touch & Go was experiencing the wave of backlash from society over the course of two years, not to mention watching my father (my best friend) break down in tears. I pitched the film to a chapter of Women in Aviation and a couple of women were so offended by the content it stirred up a heated discussion where I was schooled on the inappropriate nature of the content. I was utterly beside myself in tears in a parking lot. I called one of my editors, Alex Preston. Alex’s said, “It sounds like you’ve done your homework. Now you know how powerful your story is.” Encouraging statements like these and a belief in persevering on the journey carried me through the execution of Touch & Go.  As a filmmaker, I learned very quickly that it is easier to write fiction than, to tell the truth.

HH: Reliving this story over and over and over again was not only the most challenging part of this production, but over time became a healing aspect of sharing a vulnerable experience.

HH: Someone once told me, “turn everything ugly in your life into something beautiful”. My advice to first-time filmmakers is to use filmmaking as a tool to paint your own canvas.