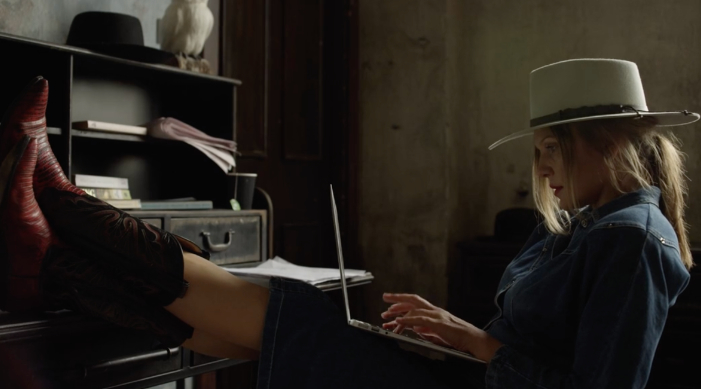 Synopsis: Betty Winter, award winning screenwriter, has a showdown with Executive Producer, Richard when he tries to hijack the film she has written by making the female characters die a sexy death, instead of her female empowered version.  A film within a film, Trigger Happy explores the issues raised by #metoo and the treatment of film industry workers.

SG: The inspiration for my film was the triggers I felt during the beginning of the #metoo movement. I wanted to take the triggers and make them “happy”. Turn it into a moment of empowerment and tribute to those women who had the courage to come forward knowing the backlash they would face. I also realised that it would be a long road and justice is not on the side of the victims. As Betty says, “We have to take the law into our own hands”.  In light of Brett Kavanaughmaking the Supreme Court  and Harvey Weinstein’s first charge being thrown out twelve months after the start of this movement this is true more than ever. Women need to be in positions of power, in the Supreme Court, to stop this happening. I feel the sentiment of the film, a woman taking back her power, is relevant now more than ever.

SG: I wrote the film one night in Oct 2017 during the revelations about Harvey Weinstein and the start of the #metoo movement in Hollywood. We filmed it over two days in Dec 2017. I was very fortunate to have a wonderful DP in Velinda Wardell (one of only 10 accredited female DP’s in Australia out of a cohort of over 300). Gen Graham came on board to do design. All the actors and crew were fabulous and donated their time and talent. We turned it around very fast. I was very fortunate to have so much good will.

SG: The short time span means you need to be very economical and get the point across quickly. By setting ours in the Western genre we were able to use the conventions of the Western to set the scene so the audience knew what world they were in straight away. The trick was to turn the conventions on their head. The beauty of short films is you have to be brave and stick to your guns so to speak.

SG: There were three challenging aspects to making Trigger Happy.

The first was casting the role of Richard the misogynistic producer. We were told by male actors we shouldn’t make this film and that it was too early. Our response to that was “centuries of oppression mean the time is right for this film. I sent it to Dan Krige, a wonderful actor, who came back straight away and said he would love to play the role. He did an amazing job given he is one of the kindest men I know.

The next challenge was shooting the main scene in one shot on a circular track. We rehearsed on the first day in melting heat. Shot it the following day which was much cooler. Velinda and I realised we had to be very brave and make a choice on the day of which take we thought was best. We didn’t shoot extra coverage as we really believed it was the best way to tell the story and show the power shift.

There was one take we both felt was right. When it came to the edit we didn’t look at any others. We just had to stick to our guns. It was a fabulous experience.

SG: Follow your instincts. Stick to your guns. Don’t let anyone tell you that you can’t do it.

It’s all learning, all experience. Its the best way to learn.

Play with the conventions. Be brave. Have fun. It’s so much fun making films.