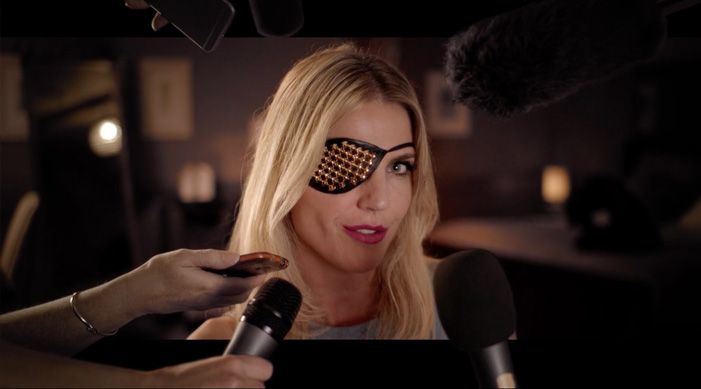 Synopsis: Narcissistic Charlotte has three values in life: beauty, success and admiration from her online followers and men. She cannot bear the absence of these qualities in her heart broken friend during a weekend away in Guernsey. Charlotte’s lack of compassion for her BFF leads to her paying a high price.

OR: What was the inspiration for your film?

KK: When Karen and Marinda, the producers and stars of the film, first approached me with the script for Patch I was immediately drawn to the deliciously dark and ironic comedy. After then meeting the writer, Mariska Breedland, and discussing with her ways of mining the comedy seem even further, I knew I was in for a treat.

Making this film was an exploration into friendship, trust and the vision of self. How do we define who we are, and how does that translate into how we treat others?

OR: When did you conceive the idea for your film and how long did it take before it was realized?

KK: Marinda and Karen came up with the the idea to make a short film in April 2015. The actual work of creating the film turned out to be a study in cooperation and collaboration. I got to work with DP Dick Merx, with whom I’ve shot two features and numerous shorts, and we assembled a kick-ass crew, both from Amsterdam and from Guernsey, where the film was set and shot in October 2015. At first I was worried about the process of directing two actresses who where also the producers and creators of the project, but those worries proved unfounded and the shoot and subsequent post-production went extremely well.

OR: What was the most challenging aspect of working in a short film format?

KK: Short films are a strange art form. There is so much story that can be told in 10 minutes, and yet in order to create a journey with a beginning, a middle and an end, so much must be left out. I hope we achieved the right balance with Patch, and that audiences enjoy it.

OR: What was the most challenging aspect of your production?

KS: We sailed to the remote island of Guernsey, with exciting productions variables as weather conditions and insecure ferry services after a nine hour drive from Amsterdam and a stay over in France. We braved a storm with two vans filled with crew and equipment. Finally ashore, the Guernsey crew, production manager and international cast were waiting for us. Guernsey turned out to be the perfect place to let the characters come to life and to shoot our first film ‘Patch’.

OR: Do you have any advice for first-time filmmakers?

KS: Once you have an idea you really believe in, just go for it. As actresses (with quite some managerial and organizational skills that we gained over the years) we dreamed of producing our own films. We did this with ‘Patch’ and there is more to come. There is no better pay off for audaciousness and hard work than making your dream come true. (We were thrilled when we heard we were selected for the LA Shorts Fest 2016.)  Last but not least, try to connect and learn from experienced filmmakers and take criticism as free advice.