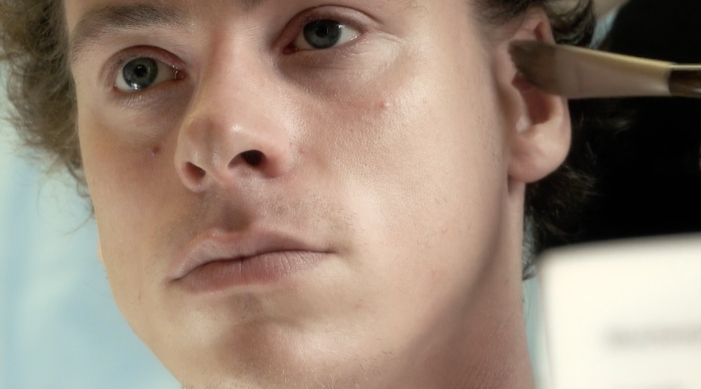 Synopsis: On a superficial level, Biz tells the story of an angry young man–a disaffected actor. He has sex with this gorgeous woman who is clearly more interested in his genes than anything resembling a relationship and tells him so via WhatsApp. Our actor appears to be disappointed at this and the way the apathetic theatregoers, signified by mannequins, fail to respond to his outburst of emotion.

On a deeper level, the narrative asks questions about the degree neoliberalism has succeeded in co-opting the arts (filmmaking being one of them). This ruthless form of capitalism holds that all human interaction is driven by the desire to get the best deal. Business relations and economic transactions pervade all aspects of life. Love is a fiction. According to this doctrine, there is no alternative viewpoint. Our caring for (and about) each other is a thin veneer rather than a deep rooted impulse, the icing on our dog-eat-dog nature. Yet, if it has ever been the role of the artist–much like the jester at court–to not only entertain the powers that be but also criticize the political system, why is it that the protagonist, eventually, doesn’t act any different from everyone else? What is HIS game?

BB: Well, it started with me wondering if art has any intrinsic value, especially in the world today where neoliberalism holds sway. So, as an artist, how do you expect the world to respond to your creative output against the backdrop of this ruthless capitalist ideology which states that all human interaction is business interaction? What’s your motivation for making art in this scenario, by which I mean things as diverse as film, music, poetry, the fine arts and so on? What is your ulterior motive?

It can be many different things, of course, and you might not be fully aware of what drives you to do it. I often ponder these questions and so far, end up feeling that being creative is part of my personality structure. This is who I am, it’s my way of engaging and communicating with the world. This realization helps me maintain my artistic freedom. However, art is often seen as a either a service or a product or both which complicates the matter. If your film does not entertain the audience, if it doesn’t keep them glued to the screen people will most likely give you a thumbs down. But should that be the only measure of its merit, and should you care? I believe Tony Morrison is right when she says that all good art is political. If so, a genuine artistic expression is likely to make you feel slightly uncomfortable rather than merely delight and entertain because it’s based on the observation that life in this particular place at this specific moment could be better for many of us. Even abstract art can be seen as political, but I won’t go into that here.

To me, art is mainly a spiritual thing, a reminder that we can be so much more than our mundane selves. I try to fully immerse in the creative process and let greater powers—whatever they may be—take over the wheel. In this state I am no more than a secretary to something that is greater than myself, a source I believe all of us can learn to tap into. But there is more to VOICE IN THE ATTIC – Biz, of course, because once you make a living out of it your art becomes commodified. The process becomes a product. Granted, that idea isn’t original. Andy Warhol’s pop art made it palpable for us in the 1960s. It goes hand in hand with the notion that it is the market and only the market which determines an object’s worth. If it’s placed in one of the great temples of art or if it’s being screened at the Golden Globes it must be of value. It’s transformed to a piece of art though the change may be imperceptible. Think of Duchamp’s Fountain for instance. Philosophers call it the Institutional Theory of Art: institutions like museums (or the Oscars) are guarded by elitist committees (the gatekeepers) who determine art’s worth. It has no intrinsic value or merit. Needless to say, I do not fully subscribe to that view because I don’t think that’s the whole story, but you can see it in VOICE IN THE ATTIC – Biz too. The film raises the question of what makes the difference between the disaffected actor on this big stage in this lifeless temple of High Culture and the gloomy narrator busking in front of the building, offering social commentary like the choir in Greek drama. These two characters are complementary. One looks like a hobo in a dressing gown but he has (rather) made it big. The other is well dressed (except for the lack of shoes) but has no access to this gated community. The actor in the temple of high culture is being consumed by this apathetic audience—bored consumers, signified by mannequins—whereas the narrator attempts to offer metafictional commentary from the streets (the low/mass/pop culture point of view) but is in no way morally superior to the other characters. He too, is dependent on doing business with the world. He too needs money and an audience that pays attention but is nowhere to be seen. Both characters have become co-opted by the system. Their only interaction with each other is a symbolic one, a business transaction—the tossing of a coin into the guitar case and the acceptance by nodding. There’s no synergistic effect, no cooperation.

BB: I wrote the first draft of the lyrics and music in 2015 while spending most of the year in London, one of the dark, pulsating hearts of neoliberalism—the belly of the beast the text refers to. So the gestation period of the project was two to three years. Early in 2017, I wrote the script for the film and began discussing my ideas with my collaborators Sue Zea, Renate Passmann and actors Leonard Lange and Anja Schreiber who gave great input.

BB: Working in a short film format or any other genre that has restrictions in terms of length means you need to know how to focus and sort of ‘distill’ the meaning. What, in a nutshell, is it you wanna say? How can you make it simple without making it simplistic? How to reduce it to its essence without becoming reductionist? If need be you must fearlessly cut the narrative back to the root, as the word radical (from Latin radix) suggests. At the same time, however, this needs to be done carefully or the story starts falling apart, losing its subtlety.

BB: VOICE IN THE ATTIC – Biz is a no-to-low budget production and a great team effort. Without a dedicated team—and a network of people who saw the potential of it or were just kind enough to offer support—this would’ve been impossible. Among the challenges were the transportation of some thirty mannequins in a small van and the on-set coordination, as we only had two days to shoot Biz. So you can imagine everyone constantly lugging stuff around and being near exhaustion…At the end of day one it became clear that the actress we had initially planned to shoot the sex scene with was unavailable so we drove 200 miles to Anja’s place. Night fell, it began to rain hard. Leonard’s car broke down and had to be towed. Madness as usual, but we got through.

BB: I’d probably advise you to learn something about storytelling. Unless your uncle happens to be Steven Spielberg who offers you his expertise, studio, gear and so forth for free, do not even think about competing with feature films in terms of CGI, costume designs, stage sets, lighting, actors and extras and whatnot. It would be stupid to even try and (re)create something like Ready Player One on a budget. However, I believe that it is perfectly possible to tell the story of Ready Player One in a micro-budget short film and win an award. How? Well, the message is that friendship matters, as does love, and while VR gaming is cool you should go offline every now and then to celebrate your relationships in the ‘real world’. There are many different ways to tell that story. One more thing: Don’t overanalyze. Unleash your creative side and enjoy the ride. Making art should be fun.