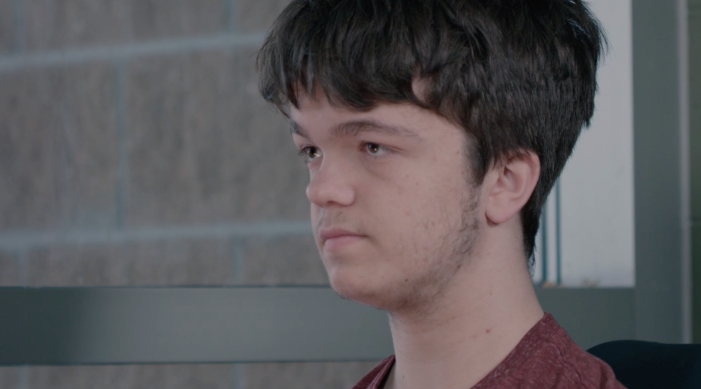 Synopsis: A young disabled teenager entering high school finds himself working towards gaining a better life for himself while also altering the perceptions of the people around him regarding their views of people with disabilities.

SM: As someone living with a disability, this film is based on a lot of the experiences and emotions that I have went through in my life. A lot of the times, when disabilities are discussed in the mainstream media, its from the perspective of the physical challenges those with disabilities face, or it is in a way that talks about the differences of those with disabilities. That’s why when I approached the subject, I wanted to make people with disabilities relatable to anyone while also showing the social and emotional challenges of having a disability versus the physical challenges. For a lot of my life, I have struggled to feel accepted by society or myself because while I have dwarfism and am in a wheelchair due to not having developed balance as a baby, I think people believe that I have a much bigger disability than I do. As a result this film is very much inspired by my ongoing feelings of struggling with societal and internal acceptance.

SM: This initial idea was first conceived back in 2012 when I was first experiencing a lot of the feelings from the film and as a writer, I’ve come up with dozens of ideas for films and television shows, but time and time again, no matter how many ideas I had or how much time would pass, I kept coming back to this idea over and over again. Each time I would come back to the idea, I loved it more and more because that this type of idea was unique and each time I revisited the idea, I felt like I had more and more to say about the experience of growing up with a disability. After years of gaining personal and professional experience, I finally began putting my idea into production on November 30th of 2017 when pre-production first began.

SM: I’m a big idea and big picture kind of person, so I have a hard time condensing ideas when I think of them. This idea is actually mainly envisioned as a full television show (a goal I am still working towards), but because I do have that goal, I wrote the first few drafts of the script as if I were writing a television pilot. Those drafts lacked focus and spent too much time setting up events, as opposed to creating a well rounded film. Once I began looking at the film as its own entity, I was able to zero in and focus on the emotions, message and authenticity that I wished to convey.

SM: Since this film is set in a high school, our production team worked to partner with Halifax West High School (the high school that I went to) and its film program. This meant that we needed to work around the school’s available hours (often only having seven hours a day available) and we had to rely on the school for having extras in the film. It was a daunting task as it was not something I had ever approached before, but both the students and staff could not have ben nicer or more helpful (especially the multimedia teacher named Chad Wadden, who volunteered his time to be on-set with us outside of school to supervise the high school students on-set).

SM: Stick to the stories and emotions that are important to you. A lot of the times as a filmmaker, you’ll come up with dozens of ideas and concepts, but it is the ideas and stories that relate to you personally and emotionally, that are truly worth telling. Filmmaking is long and rigorous process, so if you’re going to tell stories as a filmmaker, tell the ones that you never stop getting excited about. Authenticity is important and it’s often times its the artists with the most to say that last the longest because they’re able to relate to the audience and build a personal connection with the audience.